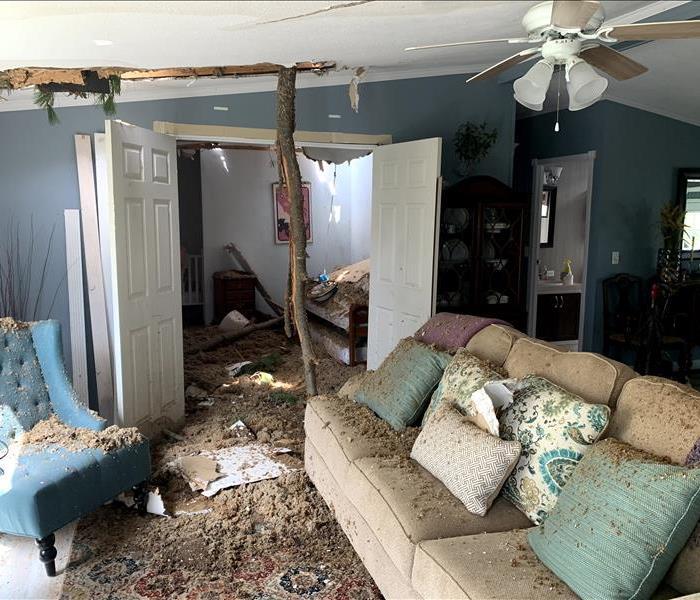 SERVPRO of Marshalltown and the SERVPRO Catastrophic Storm Response Team worked together to restore homes and businesses damaged by the 2020 derecho.

When a strong hurricane-like derecho storm ripped through Iowa this last summer, calls started coming in to SERVPRO of Marshalltown immediately after the storm moved through the area. The volume of calls made it clear this was no average summer storm, so after we had sent all our own crews out on jobs, we called in SERVPRO’s Catastrophic Storm Response Team, a national network of more than 1,700 strategically positioned franchises on standby and ready to mobilize at a moment’s notice when large storms strike. By enlisting the help of the storm team, we knew we would be able to get to all our customers faster and minimize further damage from happening.

Within 24 hours of our call, the national team had set up a local command center with a project coordinator and highly trained crew chiefs and technicians to handle the overflow of storm damage calls coming into our office. Lori Newhouse, our office manager, managed the incoming calls and worked with the large team project coordinator to assign overflow jobs to the additional crews.

Responsiveness That Can’t Be Beat

Within about two weeks, SERVPRO of Marshalltown, together with the national team, had responded to all the storm damage calls from commercial businesses and residents in our Marshall, Hardin, Grundy and Tama County territory. We were told by many of our customers that we were one of the most responsive companies to help people in the area with their various storm damage needs, whether it was boarding up or tarping damaged property to prevent more water from getting in or drying, demo or restoration work to homes and commercial businesses where water had penetrated and caused more extensive damage.

We know we can trust SERVPRO’s Storm Response Team to handle our customers with the same care and expertise as we do. Because SERVPRO crew chiefs and technicians are all trained to meet the same high standards set by the Institute of Inspection Cleaning and Restoration Certification (IICRC), they provide an equally high level of experience and professionalism, no matter what franchise they work for. It’s why SERVPRO has a reputation for consistent, top-notch service across the entire organization. Here’s just a few of the large storms our national storm teams have handled in recent years: